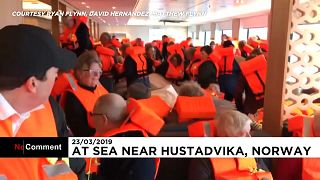 More video emerges of chaos on board Norway ship

Passengers filmed their scary experience on the Viking Sky cruise ship off the coast of Norway on Saturday (March 23) and Sunday (March 24).

Videos posted to Twitter by passenger Ryan Flynn show him and passengers David Hernandez and Matthew Flynn as the floor flooded with water and the furniture in the dining hall swayed and moved.

Rescue helicopters evacuated dozens of people from the ship, which suffered engine failure as well as suffering from the effects of a storm on Saturday (March 23), police and rescue workers said.

The maritime rescue service said the Viking Sky, with about 1,300 passengers and crew on board, had sent out a mayday signal as it had been drifting towards land.