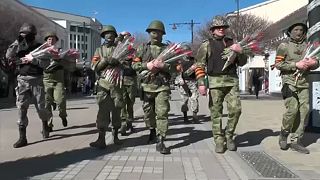 Masked activists in military fatigues fanned out across the Crimean city of Simferopol on Thursday (March 7) handing out flowers to women ahead of International Women's Day and the fifth anniversary of the Black Sea peninsula's annexation by Russia.

The activists, backed by a local lawmaker, said they were dressed up as the "polite people," a term coined in Russia in 2014 for the Russian troops in unmarked uniforms who seized control of Ukraine's Crimea peninsula after a pro-Moscow government was toppled by a popular revolt in Ukraine.

Moscow initially denied its troops were behind the seizure of Crimea but later acknowledged it. Western countries and Ukraine, which denounced the annexation as illegal, referred to the undercover Russian troops as "little green men."