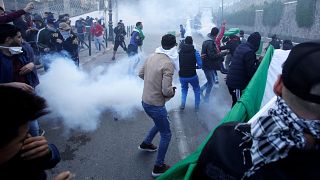 One dead as protesting Algerians call on Bouteflika to step down

Thousands of people in cities across Algeria called on President Abdelaziz Bouteflika to leave office on Friday (March 1) in the country's biggest anti-government demonstrations since the Arab Spring eight years ago.

The protests were mostly peaceful but scuffles broke out in the capital Algiers between police and protesters near the presidential palace, witnesses said.

One person died, according to a local official. Local media said it was a 60-year-old man who suffered a heart attack.

Several protesters and policemen were wounded during clashes in Algiers, state television said. News website TSA put the number of wounded at 63, citing official figures. It said 45 people were detained.

Large scale demonstrations - rarely seen in Algeria - against plans for Bouteflika to seek a fifth term in power in April elections began a week ago, but Friday saw the biggest turnout yet.