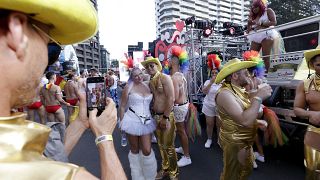 More than 300,000 revellers on Saturday descended onto Sydney's iconic Oxford Street for the Gay and Lesbian Mardi Gras parade.

Participants in colourful costumes marched to music and danced to the beat of drums.

Some 12,500 people in almost 200 floats were taking part in the 41st edition of the parade, which was centred around the theme: "fearless."

In a rare move,  the New South Wales government has relaxed the city's "lockout laws," which restrict the sale of alcohol and entry to live entertainment venues, for the event.