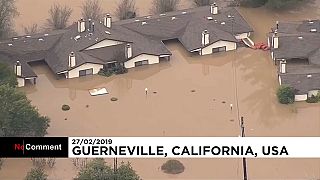 Officials say flood waters have inundated a California town north of San Francisco and that the community is now only accessible by boats after a rain-swollen river overflowed its banks.

The Sonoma Sheriff's Office said in a statement on Wednesday that Guerneville is "officially an island" because all roads leading to it are covered by water.

Residents of the town of 4,500 people and two dozen other communities along the Russian River were ordered to evacuate.

The National Weather Service says the Russian River in Sonoma County topped 9.8 metres on Tuesday evening and it that it could reach more than 14 metres by Wednesday night.

The river has repeatedly flooded following heavy rains, but this marks the highest level that its waters have risen to in more than two decades.