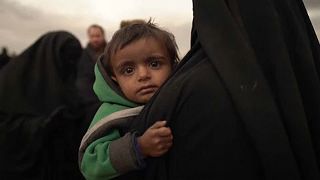 Evacuation of civilians from final ISIS stronghold in Syria continues

Men, women and children continued to be evacuated on Wednesday out of Baghouz, the only remaining territory under the control of the so-called Islamic State (IS) in Syria.

A convoy of trucks transported dozens of people into the desert through a humanitarian corridor from Baghouz, which is near the Iraqi border.

Fighters from the US-backed Syrian Democratic Forces (SDF) have delayed their final assault on the remaining militants inside Baghouz until all civilians have left.

The military campaign to uproot the militants from the eastern banks of the Euphrates began in September.

The evacuees said food was running low and clean water and medicine were scarce.

SDF officials predicted that a military offensive will follow after the last civilian has left the IS pocket.