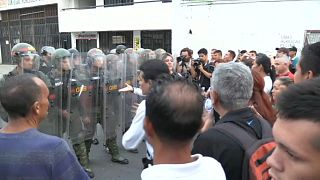 The Venezuelan National Guard (GNB) clashed with citizens in Urena, Venezuela, on the border with Colombia.

Protesters threw projectiles at the armed forces, who replied by firing in their directions.

The armed forces closed a road to control the border and prevent humanitarian aid, which has been stockpiled for days on the Colombian side of the border, to enter Venezuela.

The aid has been sent by Colombia and the US to help Venezuelan citizens, who are suffering from widespread shortages of food and medicine caused by an economic crisis.

Venezuela's President Nicolas Maduro denies that the country is economically struggling and has refused that aid crosses the border into Venezuela, shutting the country's border with Brazil and blocking the border with Colombia with shipping containers.