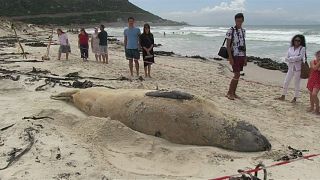 An elephant seal has made its way to Cape Town’s Fish Hoek beach, having traveled across 6500 kilometers of the sea from Antarctica.

He’s made a nesting area in the popular stretch and locals and tourists can get a good look at the rare animal but must give him space.

This particular creature, known as Buffel, has been seen before and has been tagged by scientists.

"It's not very often that elephant seals come to South Africa. They are very rare in South Africa, as I've heard this one has basically been in the Cape Town area since 2014, but he's been showing up at various beaches unpredictably. Last season he was at Duiker island for about three months”, said Joshua Olsaewski, a marine bio-diversity student from Stellenbosch University.

He added, “But still it's a very rare animal in South Africa, so it's a really valuable opportunity to get. If you are into wildlife and into animals, to come and see this seal is quite special,"

Currently moulting, Buffel will spend most of his time in the sand with an occasional dip into the water to cool off.