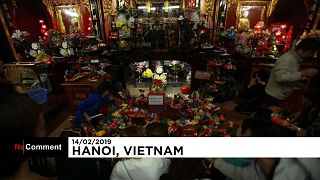 Ha Pagoda, which is thought to have been founded a thousand year ago, is popularly believed to hold matchmaking powers.

According to legend, King Ly Thanh Tong, a former emperor of Vietnam, failed to have children until he went to pray at the pagoda.

The following year, he welcomed a son, the prince who went on to succeed him on the throne.

Today, the Ha Pagoda is considered a sacred place for singles to come and express their romantic wishes.