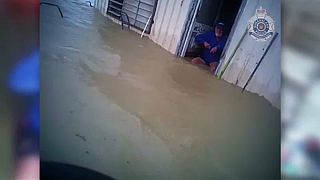 Bodycam footage by Australia's Queensland police shows the evacuation of an elderly man who was sitting waist-deep in rising floodwaters in his house last week.

In the video, troops from Richmond Police Station were seen approaching 79-year-old Desmond Smith in Maxwelton, where he lived with his dog, after his neighbours raised the alert.

A policeman helped to retrieve Smith's bag before evacuating the elderly man. Smith, who slipped into the floodwaters during the rescue operation, was eventually helped onto a waiting helicopter by the police.

Queensland was lashed by torrential rains for much of last week, with severe floods and overflowing dams in the country covering farmland and killing hundreds of thousands of cattle, said Prime Minister Scott Morrison.

Smith's dog was reported by local media to have survived the floods and was being taken care of by a neighbour.