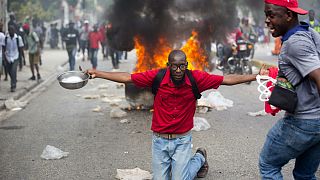 Thousands of protesters took to the streets of the Haitian capital on Sunday, clashing with police in the fourth day of demonstrations over economic mismanagement and corruption.

Protesters lit car tires in the middle of the streets and thousands marched in the street of Port-au-Prince. Several vehicles were also torched.

On Saturday, protesters stoned the Haitian president's home and clashed with police leaving at least one demonstrator dead.

Organisers pledged more protests in the days to come, increasing pressure on President Jovenel Moise, who is calling for negotiations with his opposition.

Protesters are angry about skyrocketing inflation and the government's failure to prosecute embezzlement from a multi-billion Venezuelan program that sent discounted oil to Haiti.