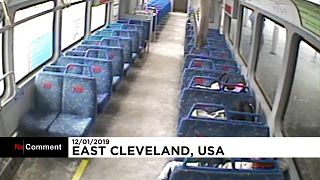 Video shows train leave with baby on board but not dad

A surveillance video released by a transit authority in the US city of Cleveland shows a man stepping off a train to smoke a cigarette and then frantically chase after it when it leaves the station with his baby on board.

The Greater Cleveland Regional Transit Authority (RTA) released a statement about the January 12 incident in East Cleveland on Wednesday.

The statement says the train's driver learned about the baby on board before it arrived at the next station, which was just a minute away.

RTA officials responded and quickly returned to the station where the father was reunited with the child.