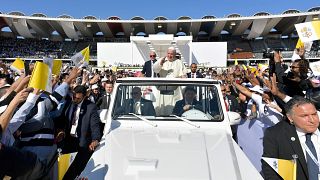 A little girl defied tight security to fulfil her dream on Tuesday (February 5),  breaking through a police cordon to greet Pope Francis.

The pontiff had just entered Abu Dhabi's stadium on his pope mobile for the final mass of his two-day visit to the United Arab Emirates.

Unimpressed by heavy security, the child screamed as she ran to the Pope.

Pope Francis told his inner circle of guards to let the child come close and he bent down to touch her head. A second child then joined her after also breaking through security.

"She was courageous,"  Pope Francis told journalists later on his way to Rome. He said he was sure the child would have a bright future and added: "Dare I say: "poor husband!"