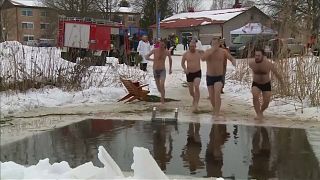 Contestants from all over the world braved the cold for the European sauna marathon in Otepaa, Estonia on Saturday.

The bizarre marathon pits teams of four against each other in fancy dress with the aim to run from one sauna to the next in freezing temperatures.

The rules of the game are simple: teams are giving a map of all the participating saunas and have to spend at least three minutes in each one as well as nominate a team-member to jump into an ice hole at each stop.

Team Selfie took top honours on the day finishing the race in just over three hours and received their very own hot tub as a prize.