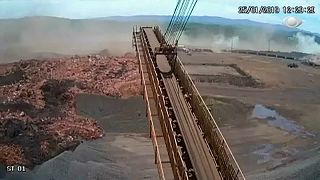 A video released Friday shows the exact moment a deadly dam burst in Brazil on January 25.

The dam failure unleashed a surge of mud that buried buildings adjoining the dam and several parts of the nearby city of Brumadinho.

Authorities on Thursday said a total of 110 bodies had been recovered and 238 are listed as missing.

Vale SA, the Brazilian company that owned and operated the iron ore mine, has said the torrent of reddish-brown mud unleashed on Friday did not contain dangerous levels of metals