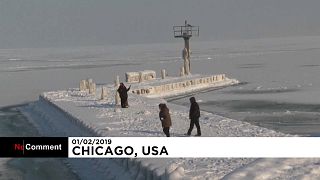 Rivers freeze over, ‘ice sculptures’ form in US extreme weather

The extreme cold weather in the United States Midwest has frozen rivers and turned ordinary objects into “ice sculptures”.

In Wilmington, Illinois, locals were keeping a close eye on the Kankakee River amid concerns over the potential for flooding as a result of warmer temperatures expected during the weekend.

According to weather forecasts, more than 95% of Lake Michigan had iced up by Friday.

But while creating an impressive spectacle, the extreme cold also posed major risks, with reports of fatalities because of frostbite.