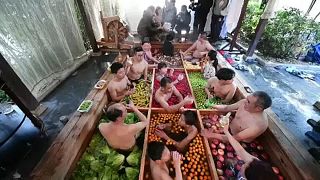 ‘Human hotpot’ and extreme weather: No Comment of the week

Visitors to the town of Hangzhou in eastern China bathed with fruit and vegetables on Sunday in a hot spring pool designed to look like a hotpot.

Inspired by the popular Chinese dish that sees diners cook meat, vegetables and noodles in a pot of spicy broth, the spring was designed to promote a healthy lifestyle in the run-up to the Chinese New Year.

In Canada, hundreds of brave swimmers enjoyed a far colder dip as they jumped into icy waters for the Polar Plunge event.

Meanwhile, in the French city of Lyon, chefs from around the world battled it out in a culinary competition known as the Olympics of cooking.

A torrent of polar air brought record-low temperatures to the US on Wednesday, with people pulling on their heaviest coats in a bid to deal with the extreme weather.

Elsewhere, in the Indian city of Jalandhar, a leopard attacked terrified residents on Thursday.

Footage of the incident showed the wildcat attacking an official before jumping up a wall and running across a field, where it attacked at least six people.