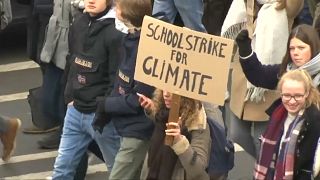 12,500 students skipped school on Thursday for the fourth consecutive week to march in Brussels against climate change. However, turnout at this week's march was low considered last week's less march gathered some 35,000 students in the Belgian capital.

In the whole of Belgium, about 30,000 students in total participated to similar marches.

Students carried signs, played music and chanted as they walked through closed-off streets calling on local politicians for stronger action toward climate change.

Students were joined by a group of older people, who call themselves "Grandparents for climate". One of their members, 68-year-old Michel Depaepe, said he was participating in the march so that politicians take measures to safeguard the planet for the future generations.