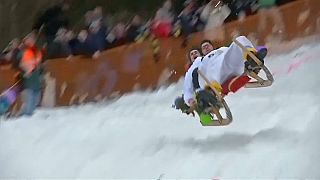 Racers slide downhill through a narrow forest trail on the traditional two-person sledge, knowing the last test is a spectacular bump at the end of the race that will make most sledges crash.

The tradition dates back to a bet made in 1928, when a group of 30 sledgers and 40 horn sledgers (carrying two people) bet on who would be fastest to make it to the valley through the 1.5 kilometre long trail.