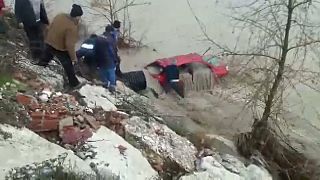 Dramatic video footage has captured the moment that a man was dragged away by floodwaters as he tried to rescue a woman stranded in her car.

The video, captured by Demiroren News Agency, shows the man leaning into a car stranded in a river in Turkey's southern province of Antalya in a bid to rescue a 20-year-old woman.

The car is then seen being swept downstream by floodwaters with the man inside.

The man was rescued and the car was towed to the shore by rescuer teams, DHA reported.

However, search efforts were still underway for the 20-year-old woman, whose car was pulled into the flooded river by fierce winds.