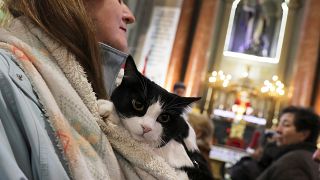 Here are some of this week's top No Comment videos: We start off with the heart-stopping moment a baby fell out of its car seat in the United States.

In Austria, a severe avalanche forced locals to sweep snow out of their homes.

Tourists in the resort town of Alushta, Crimea, can check out a brand new indoor amusement centre dedicated to sci-fi fans. The centre called "Guardians of the Empire," allows patrons to mimic life in an alternate universe. They can bump into a captured alien, hibernating cyborg or stumble upon an arsenal of laser guns.

In India, 100 million pilgrims descended in Allahabad to celebrate the "sacred jar" festival. Devotees took a dip in the sacred waters of the Ganges and Yamuna rivers.

And finally, forget Sister Act, a group young nuns from Peru have attracted millions of social media followers with their rocking music.