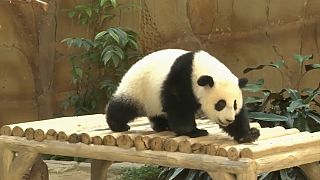 A giant panda born in a Malaysian zoo celebrated her first birthday in front of adoring visitors on Monday with a cake made of ice.

The youngster looked around shyly as a zookeeper carried her to a platform in her enclosure where the cake, which had a large number "one" on top, was waiting.

After nibbling at some carrots used to decorate the creation, the panda, who has not yet been named, seemed to tire of the celebrations and fell asleep.

It's estimated there are some 1,800 giant pandas left in the wild, living mainly in bamboo forest in the mountains of western China, according to environmental group WWF.