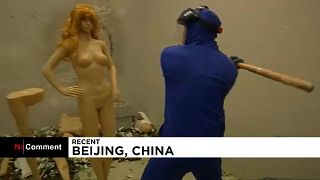 Have a smashing time in Beijing's anger room

Ever wanted to vent out your anger by smashing something but were prohibited from doing so? Now you can in Beijing's anger room.

Equipped with bats and hammers, people in the capital are letting out their frustration, anger, and stress in the city's first anger room by smashing objects, ranging from old appliances to glass bottles.

Founded by Jin Meng and her friends four months ago,  people using the anger rooms, named 'SMASH', are breaking 15,000 bottles a month as they let out their pent up emotions.

Targeting people between 20 to 35 years of age, Jin said the space is not a place to promote violence, but to reduce people's stress in large cities like Beijing, where they are under mounting pressure.