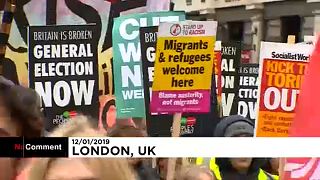 They called on Prime Minister Theresa May to resign for her government's massive  cuts to welfare, education, the National Health Service and other services.

In Trafalgar Square a few of them clashed with a few pro-Brexit protesters who were also wearing yellow vests.

The vests are a sartorial symbol of anti-government protest in France.

Police said they made one arrest after a man assaulted a police officer.