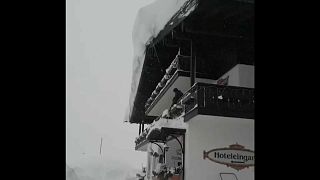 Heavy snowfall in Austria and Germany resulted in the deaths of seven people, Austrian media reported on January 7, with thousands cut off in mountain regions.

Bavaria in southeastern Germany received more than 60 centimetres of snow, prompting schools to cancel classes, while about 120 flights were cancelled from Munich Airport, Deutsche Welle reported.

Between 50 and 80 centimetres of snow fell over areas in western Austria, resulting in roads being blocked and helicopter flights being prohibited for safety reasons.

Power was lost in hundreds of houses due to the storms and, in the state of Styria in southern Austria, 2,000 people were cut off, including skiers, Die Presse reported on January 7.

This footage shows people attempting to remove snow from roofs and roads in Winklmoosalm, Germany, near the Austrian border.