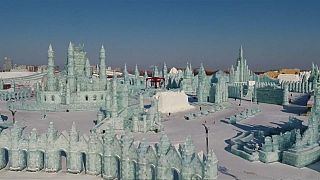 China's northern city of Harbin opened its annual ice and snow festival on Saturday with fireworks that lit up the skies over the icy wonderland.

When night came, coloured lights illuminated the towering sculptures of ice and snow, carved by thousands of artists and workers.

The 35th Harbin International Ice and Snow Sculpture Festival opened with the theme "20-year Grand Ceremony & Review". It is organised by the China National Tourism Administration.

The festival has drawn millions of visitors from around the world every year since its inception in 1983.