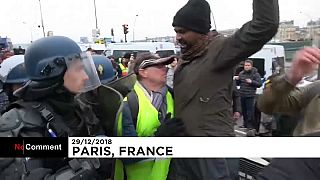 Demonstrators gathered in city centres and some kept numerous roads across the country blocked on Saturday.

The movement has shaken Emmanuel Macron's presidency and is said to be driven by anger over a perceived squeeze on household income.