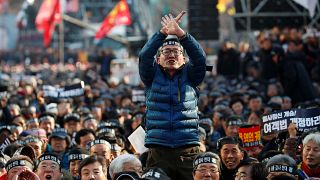 Tens of thousands of taxi drivers in South Korea went on a nationwide strike on Thursday, snarling up traffic in Seoul, in the latest protest at a planned Uber-like ride-sharing service.

An estimated 50,000 taxi drivers, wearing headbands, chanting slogans and waving banners, rallied outside the parliament, calling for the car-pooling app to be banned, AFP photographers at the scene said.

Drivers say the service being introduced by KakaoTalk - the country's largest mobile chat app - will threaten their livelihoods.

A backlash from taxi drivers in South Korea forced US giant Uber to close its main ride-sharing service in 2015. The company now has only a minimal presence in the country, offering only taxi- and licensed-hire vehicle services.