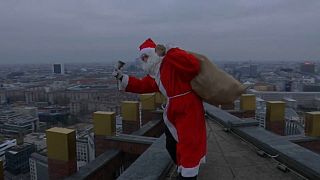 Santa Claus ditched the traditional chimney and rappelled down a high-rise tower on a downtown public square in Berlin on Sunday (December 16) to deliver gifts to all the good boys and girls.

After a sack of presents dropped from his sleigh, St. Nick made a pit-stop at the Kollhoff Tower on Potsdamer Platz to look for it. Relieved upon finding it, he decided to surprise the kids at Panoramapunkt, a tourist attraction with a cafe and observation deck reached by Europe's fastest elevator.

He faced a dizzying descent from the top of the tower, some 100 metres up. He first got down to the cafe on the 24th floor with only a rickety rope ladder to help him.

The children watched in excitement as he greeted them through the windows before climbing inside to dole out presents, and emptying out the rest of his sack later outside the building.