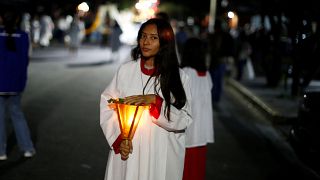 Pilgrims arrive at Virgin of Guadalupe Basilica in Mexico City

Every year, millions of pilgrims come from various parts of Mexico and elsewhere to pay tribute to the Virgin of Guadalupe, who, according to oral and religious tradition, made her appearance before the native Juan Diego on December 12, 1531.

An estimated 5 million people march to the Basilica and many stay to sing 'Las Mañanitas' (birthday song) at midnight, along with groups of local mariachis and singers.

On bicycles, trucks and on foot, these millions of local pilgrims arrive in the Mexican capital carrying figures that represent the Virgin, while a significant number of tourists do so from their respective countries. Such is the case of Gerard Batad, a French citizen, who along with 26 others have made this pilgrimage over the last 20 years.

The visit of Felipe Barajas, who carries a small portrait of the Virgin, is in gratitude for saving him from an accident in which his car overturned weeks ago.