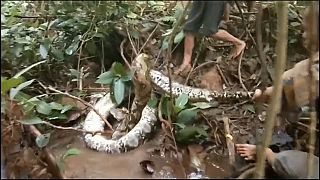 A viral video showing a gigantic python wrapping itself around an Indonesian villager has secured more than a million views, after locals wrestled with the serpent before successfully caging it.

The villagers initially thought the giant snake, which was resting by the river, was just an old log before one of them touched the serpent, triggering it into action.

The November 22 video, shot by villager Ronal Efendi Coto, shows the man fighting for his life while others frantically try to pry him loose from the python's notorious death grip.

After they managed to call for help and subdue the serpent, they put it into a cage in Pucuang Anam village in Sumatra and asked a local zoo for assistance.