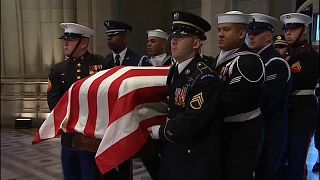 The funeral of President George H.W. Bush was held on Wednesday (December 5).

US and foreign dignitaries gathered to commemorate the life of a World War Two hero, Cold War veteran and former head of the CIA who went on to represent an era of civility in American politics.

An unusual bipartisan spirit was on display at the service at the Washington National Cathedral with both Republican and Democratic politicians gathering to honour a president who called for a "kinder, gentler" nation.

Bush, the 41st U.S. president, died at his Houston home on Friday night at the age of 94, seven months after the death of his wife, Barbara.