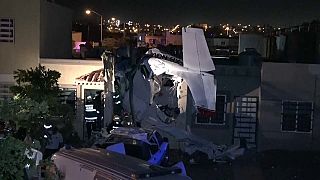 Four dead as aircraft crashes into house in Mexico

A Cessna plane collapsed onto a house in a residential area in northern Mexico. Four crew members were killed and two women on the ground were injured, according to authorities.

The accident occurred in the northern city of Culiacán, in the state of Sinaloa.

The incident happened at dusk when according to witnesses quoted by local media, the aircraft was flying low.

Emergency services were displaced in the area to avoid a possible fuel spill that could have led to an explosion.

Authorities have not offered more details about the origin or destination of the aircraft, or given a possible cause for the accident.