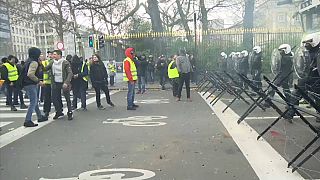 A police van was set alight, another overturned as a "yellow jackets" protest in Brussels on Friday turned violent.

Around 60 people were arrested for disturbing public order.

Michel has said he is willing to talk with some of their leaders.

Protesters wearing the high-visibility vests that have become a uniform for the movement blocked city streets with pieces of scaffolding.

The protest caused traffic chaos in the Belgian capital.

The demonstrators are angry about high taxes and living costs as a movement that started in France two weeks ago gains traction across the border.