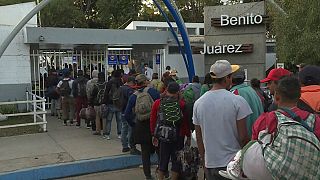 Central Americans on the border pondered about their future on Tuesday (November 27) days after U.S. authorities fired tear gas canisters toward migrants in Mexico - near the border crossing separating Tijuana from San Diego, California - when some rushed through border fencing into the United States.

Some have chosen to return to their countries saying they do not wish to die in the attempt for a better life, while others are choosing to stay in Mexico to find work.

Many of those in Tijuana remain adamant and have said they will wait there until they can seek asylum. If they enter the United States, legally or illegally, they have a right to seek asylum.

Tensions had been growing in Tijuana, and President Donald Trump said at the weekend the migrants would have to wait in Mexico until their individual asylum claims were resolved in the United States. That would be a significant shift in asylum policy that could keep Central Americans in Mexico for more than a year.

The migrants have travelled through Mexico in large groups, or caravans. There are more than 7,000 at the U.S. border in Tijuana and the city of Mexicali, with more than 800 others still moving toward the border.