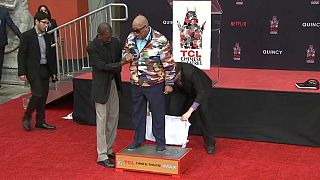 He's scored triumphs in film, television and the stage. But Jones may be best known as a record producer, with credits including Michael Jackson's "Thriller." According to record-industry certifications, Jackson's 1982 album is the best-selling ever released by a solo artist in the United States -- with 33 million units sold. It is only topped by the Eagles' "Their Greatest Hits 1971-1975," with 38 million certified.

Jones is the most Grammy-nominated artist of all time, with a total of 79 nominations. He has had 27 wins.

Guests at the ceremony included athlete Kareem Abdul-Jabbar, as well as musicians Snoop Dogg, Dr. Dre, and Usher, who reflected, "I done had some of the craziest conversations at 3 o'clock in the morning with Quincy. He be in the club longer than I'm there. I'm like, 'Where you going? You leaving?' He's like, 'I'm going to the next party. What you doing?'"

Usher turned to Jones and said, "I love you. I appreciate you. And I'm going to continue to lift you up for other forever, brother. We celebrate you today. And this is an amazing moment for all of us. I love you, Quincy."

Additional Jones credits include the Oscar-nominated film "The Color Purple," as well as its recent Tony-winning Broadway revival. Jones earned an Emmy for scoring the first episode of the landmark TV miniseries "Roots."

The event also was attended by Jones' actress-director daughter Rashida, whose documentary feature "Quincy" was released earlier this fall.

The 85-year-old Quincy Jones said, "There are only 12 notes. We've had them for 700 years and between rhythm and melody, rhythm and harmony, we have to figure out how to make those things belong to us. And it's difficult after 700 years. I'm really proud of what we did with them, though. And I want to thank my little brothers, big brothers Snoop Dogg, Usher, Kareem, brother Dre ... And of course my little doonky Rashida, who I love to pieces, popsicle. And all my family and friends who accompanied me on this journey. But you guys are the future and I love you so much and I'm so humbled by this recognition. God bless you. Thank you. You know how to make a short, bald-headed, bow-legged 85-year-old grin like a fox eating sauerkraut. I love you!"