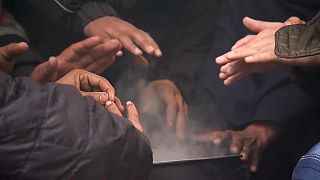 Wet snow is now falling, mud is everywhere and the tents they are sheltering under offer little comfort from Bosnia's harsh winter.

Some of the migrants are wearing only old, shabby shoes and no socks as they line up to receive hot meals from the aid groups helping out in the Borici camp, in the town of Bihac.

Migrants coming to Bosnia have been flocking to the northwestern part of the country near the border with European Union member Croatia.

Thousands have arrived this year in search of a better life in the West.

But Bosnia has been struggling with the influx.

Impoverished and still recovering from its own 1992-95 war, Bosnia has had difficulties accommodating the migrants properly.

In Bihac, the migrants are staying in a former students' dormitory that was damaged in the war.

Aid organisations have done some renovation but that's not enough.

Most migrants spend weeks, if not months, in Bosnia before they manage to cross the border to Croatia and on toward the wealthier EU nations such as Germany or Sweden.

On their way, migrants are turned back if caught by police; they sleep rough and travel with smugglers.

Nur Rahman, also from Afghanistan, says the situation is "very difficult" and migrants need more clothes and medicines in the winter.

But, he says they won't give up their goals despite the hardship.

"We are planning to cross the mountain (even) if it's minus 50," he said. "Our plan is going forward."