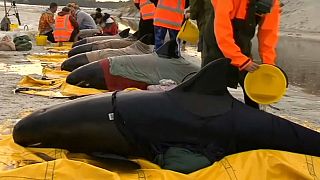 Six stranded whales are returned to the ocean in New Zealand

Conservation workers and volunteers in New Zealand managed to refloat six surviving stranded whales on Tuesday and were hoping the animals would soon swim away into deeper water.

On Monday evening, crews transported the remaining animals on hay-lined trailers to Rarawa Beach on the opposite coast of the peninsula, where the sea conditions were calmer.

The ranger said the whales were then placed in a tidal stream to relieve the pressure on their bodies. But he said the whales became too buoyant and were moved onto the sand, where volunteers kept a vigil through the night, regularly cooling the animals with water.