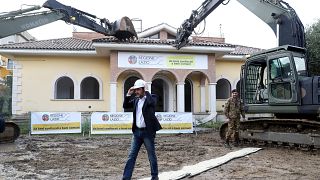 Italian Interior Minister Matteo Salvini on Monday personally launched the demolition of a luxury villa illegally built in Rome by its most infamous and entrenched Mafia clan, the Casamonica.

Salvini, who heads the far-right League party, boarded a digger and posed for media wearing a protective helmet before members of the Italian army started demolishing the villa, which will be used as a children's playground.

Speaking at the event, Salvini promised that he will chase criminals "neighbourhood by neighbourhood, street by street, villa by villa and shop by shop".