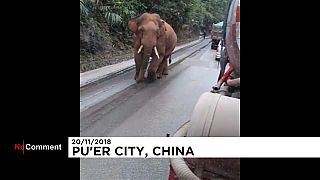 Villagers are being bothered by a male Asian elephant making frequent visits to their villages in Simao Disitrict, Pu'er City of southwest China's Yunnan Province.

At first, the elephant was found blocking the traffic on expressways. Later, the elephant broke into villages, damaging houses and eating grains.

"It came through here, and raised asbestos tiles. It stretched out its nose and fetched the corn cobs out to eat, and then ate millet, and even ate sacks!" said Zhang Li, a villager.

As Zhang's grain warehouse is near the entrance of his village, it has become the elephant's favorite place to get food.

A pile of steel pipes have been put in front of Zhang's residence by forestry workers to prevent the elephant from intruding.

Asian Elephants are level-one protected animals in China, and people know not to injure them, but the frequent uninvited visits to their villages is really a headache for them.

Now, the local forestry department has been monitoring the elephant and when it is found getting close to the habitations of human beings, alerts will be issued to avoid it.

"In Pu'er, the elephant should be the largest one in size, so we pay more attention to it. Besides, the elephant has always been moving on the expressways and villages. On the roads, it caused much trouble. If we can't deal with it properly, accident will take place. In the evening, the elephant will enter villages to get food. Thus, the monitoring emphases are in the villages," said Zheng Xuan, an elephant observer of Yunnan Provincial Forestry Department.

Fortunately, no one has been reported injured by the elephant, but there are potential dangers for both people and elephants if they continue to live and move in the same space.

"If the elephant enters the village, it will certainly threaten people. However, there are also threats for the animal because it is unfamiliar to the villages. For example, in 2011, an Asian elephant died from an electricity shock for it didn't know much pf people's living environment," said Zhou Zhitao, a staff worker of Pu'er Forestry Bureau.

Since wild Asian elephants were found again in Pu'er in 1999, more and more elephants are migrating from Sipsongpanna Dai Autonomous Prefecture to Pu'er, and from forests to villages, which has led to much pressure for the local people to protect the giant animals.

There are around 300 Asian elephants living in the areas like Sipsongpanna, Pu'er and Lincang City. Despite measures like building elephant-proof trenches and grids, dispatching observers, setting up infrared cameras, and offering food to them, some of the elephants have learned to avoid the preventive set-ups and still face dangers.

Local governments and insurance agencies are in position to give economic compensation to the villagers who suffered health and agricultural loss due to the intrusion of elephants.