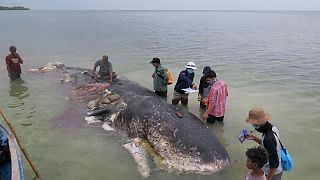 Dead whale found with 16kg of plastic in stomach

A sperm whale carcass hs been washed ashore at a beach in Wakatobi National Park in Indonesia’s Southeast Sulawesi province with 35lbs (16kg) of plastic in its stomach, researchers and activists said Monday (November 19).

Local villagers found the 10-foot whale on Sunday. The following day, a team of researchers, officials and activists arrived to inspect the carcass and discovered assorted plastic waste in its stomach, including 8kg of plastic rope, 115 plastic cups, 25 pieces of plastic bags and two pairs of flip-flops.

The cause of death was sunknown, according to WWF Indonesia and the Wakatobi Marine and Fisheries Community Academy (AKKP Wakatobi). The AKKP Wakatobi researchers took the skeleton and DNA samples for further study.