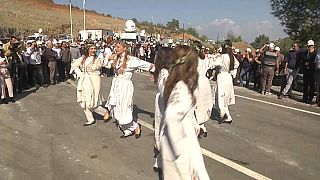 Dozens of people from the island's Greek Cypriot south streamed across the eastern Dherynia border post, walking past United Nations peacekeepers into the breakaway Turkish-backed north.

At the same time, the Lefka or Aplici crossing opened in the northwest of the Mediterranean island.

Ahead of the reopening of the Dherynia crossing, soldiers removed barriers wrapped in rusty barbed wire while a small group of riot police stood by.