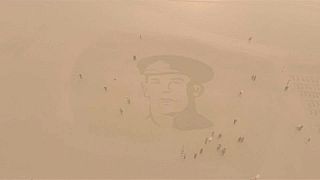 Portrait of World War One soldier engraved on UK beach

A portrait of a World War One soldier was carved onto the sands of Northern Ireland's Murlough beach on Sunday to mark the centenary of armistice day.

The subject of the picture was John McCance, a casualty of the war who was born in the nearby village of Dundrum and died aged 22 in the battle of Passchendaele in Ypres, the National Trust said on their website.

The event was part of a series of beach tributes entitled "Pages of the Sea" organised by British film director Danny Boyle and the 14-18 NOW arts programme, which commemorates WW1.

Similar portraits appeared at Folkestone, Formby and Colwyn Bay amongst other locations.