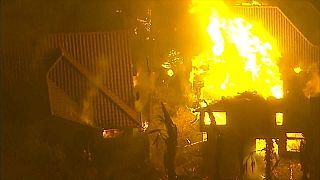 The National Weather Service issued red-flag warnings for fires in many areas of the state, saying low humidity and strong winds were expected to continue throughout the evening.

Whipped up on Thursday evening by powerful winds that pushed it through canyons, the southern California fire reached the edge of Camarillo Springs and Cal State Channel Islands, both of which were evacuated, The Los Angeles Times reported.

The blaze originally broke out in the Hill Canyon area and in just 12 minutes made its way across 101 Freeway. By Thursday evening, it had scorched up to 7,000 acres and sent residents of more than 1,200 homes fleeing.

Fire officials said they expected the blaze to burn all the way to the ocean.