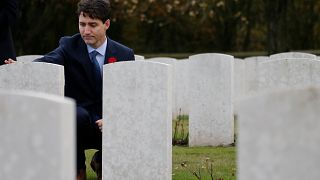 Canadian Prime Minister Justin Trudeau marked 100 years since the end of World War I on Saturday by placing a wreath at a Canadian cemetery near Arras in northern France.

Clutching a red chrysanthemum, Trudeau also walked among the white gravestones at Cemetery Number 2 at Neuville-St. Vaast, which contains the remains of Canadian casualties from the 1914-1918 conflict.

The cemetery is part of the Canadian National Vimy Memorial Park, located on the battlefield where Canadian soldiers fought during the initial Battle of Vimy Ridge offensive during the Battle of Arras.

Vimy Ridge was a decisive victory for the Allies and was important in the development of Canada's national identity and pride as four military divisions from the nation attacked together for the first time as the Canadian Corps.

Trudeau is one of the more than 60 heads of state and government in France this weekend for the Armistice commemorations.

The main event takes place at the Tomb of the Unknown Soldier in Paris on Sunday, on the 11th hour of the 11th day of the 11th month, exactly a century after the armistice