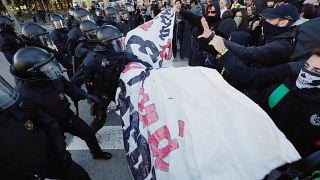 Police in Barcelona briefly clashed with Catalan separatists who were protesting against a rally by Spain's national police force on Sunday.

Catalan regional police used batons to drive back a group of separatists in the city centre, stopping them from advancing towards a march by an association of Spain's national police forces demanding higher pay.

Separatists resent the national police for using violence against voters in the unauthorised Catalan independence referendum that took place on October 1, 2017.

In September, a similar protest by separatists about another march by the same national police association ended in clashes with regional security forces.