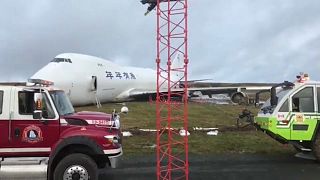 A Boeing 747-400 SkyLease cargo aircraft went off a runway upon landing at Canada's Stanfield International Airport and stopped a few meters from a fence near a public road on Wednesday.

The plane was arriving from Chicago, Illinois and went off the end of the runway, prompting the Halifax airport to activate its emergency response team.

The accident caused significant delays to scheduled flights and passengers were advised to find out the status of their flights before going to the airport.

Four crew members who were onboard the aircraft were taken to the hospital and treated for “minor injuries”, according to local news reports.