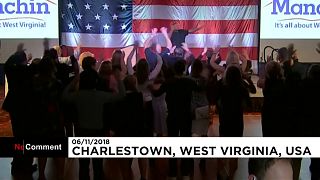 Win or not, dancing figured into election night

House Minority leader Nancy Pelosi, who saw her Democrats return to power in the House of Representatives, clapped her hands as she danced on stage with her grandsons. In Georgia where Democrat Stacey Abrams, is vying to become the nation's first African-American female governor, a dance troupe entertained the crowd as her supporters waited for results.

One disappointed supporter of Democrat Beto O'Rourke wrapped herself in the Texas flag and danced with other supporters after her candidate was defeated by Republican Senator Ted Cruz.

In West Virginia, Democratic Senator Joe Manchin's supporters celebrated his victory with a dance party, complete with a person on stage calling out moves.

While Democrats appeared to be doing most of the dancing, Republicans had plenty to celebrate. The party managed to increase their majority in the Senate.