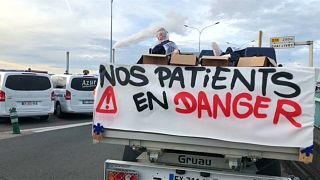 Dozens of ambulance vehicles blocked a Paris highway for a second day on Tuesday to protest social security reforms that they say would compromise some ambulance companies.

The reforms went into effect on October 1.

This could prompt hospitals to turn to less expensive providers, a change that would favour bigger companies and hurt smaller ones that cannot compete in a price war, some ambulance providers say.