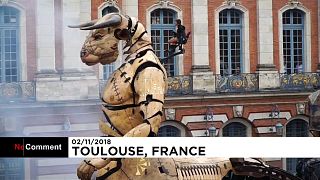 A giant mechanical spider and mythical Minotaur took to the streets of Toulouse on Friday in a performance by street theatre group La Machine.

The giant figures took two years to build, with the spider standing at 13 metres tall, and the Minotaur at 14 metres.

Dozens of operators worked to control each move by the mechanical giants as they walked through the French city to the delight of surrounding crowds.

"It's the eyes that accentuate the emotions and feelings of animals. So if the eyes, or even the others parts of the Minotaur, remain static, it doesn't work," said La Machine member Emily Battersby.

The spider and Minotaur are part of the show “The Guardian of the Temple,” which runs until Sunday in Toulouse.